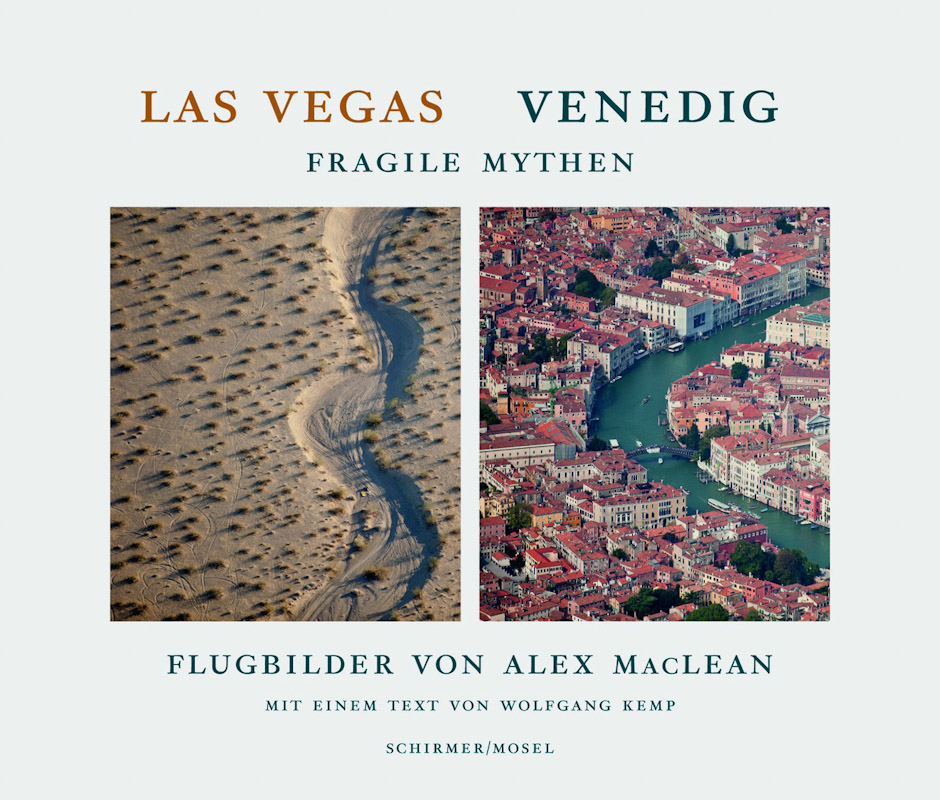 
With a photo essay by Wolfgang Kemp

Las Vegas and Venice from the air:

In his new illustrated book, American pilot and photographer Alex MacLean devotes himself to two cities that have more in common than the first two letters of their names: Venice and (Las) Vegas. Both exist in a difficult natural environment: one in salt water and the other in the desert. It requires enormous energy resources to keep them alive in locations hostile to settlement. Both cities are mythical places and, by virtue of their architecture and histories, magnets for mass tourism from all over the world.

Alex MacLean is the first person to attempt a visual comparison between these cities from the air, a comparison that opens our eyes to their structural similarities. In his latest illustrated book, he produces pictures of immense aesthetic power. At the same time, they illustrate the fatal dangers to which both cities are exposed through uncontrolled land speculation, thoughtless leisure and consumer activities, and a profligate approach to natural resources.

Venice has developed over centuries, Las Vegas within a few decades – today, both cities are artificial structures whose natural development is blocked by man's interference. And whilst Venice threatens to drown, Vegas' existence is in acute danger due to a lack of water. Alex MacLean's images document the artificial measures man uses to stave off the catastrophic effects of global warming and flawed urban planning: in Venice, "M.O.S.E", a large-scale project aimed at keeping the permanently rising floodwaters from the lagoon by means of a water-retaining structure. In Las Vegas it is the Hoover Dam the city is hooked up to like a patient to a drip, the United States' largest concrete dam being expected to quench this casino city's utterly insatiable thirst for water whilst in turn the water table continues to sink inexorably.

Wolfgang Kemp, Professor of Art History in Hamburg, has written a stirring essay on the photographs of Alex MacLean for the book. Kemp accurately describes the photographer as an "aerial wanderer" who supplies proof “taken from thin air” of the fateful effects of man’s far-reaching encroachments.

At the same time, the author provides an informative insight into the development and the history of both places, whose common characteristics he summarizes as follows: "isolated, marginal, extreme, excessive, charming, fairytale-like, artificial, symbolically charged".